The Racial Justice Institute offers learning that centers the experiences of racially, ethnically, or linguistically diverse educators serving Oregon’s Pre-K to 12 students. Funded by Oregon’s Student Success Act, the Institute aims to provide culturally and racially affirming learning environments for educators in order to address race-based isolation and fatigue and grow educators’ capacity to support, lift up, and collaboratively work with teachers, students, and families in their schools and communities.

Educators can participate in monthly, virtual learning sessions to deepen their understanding and analysis of the individual, institutional, and systemic impacts of racism on schools and communities. In addition, a small cohort of Fellows is co-developing projects that aim to positively change school-level policy and practice towards improving conditions for students. Fellows receive a stipend, coaching and meet monthly with their cohort. 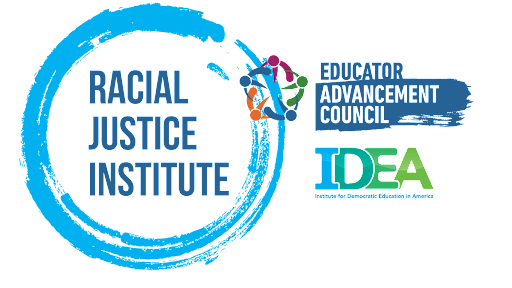 To learn more about and register for monthly, virtual Network sessions, visit the RJI Calendar.

Rooted in the values of anti-racism, capacity building, collaboration, humility, and love, the Institute aims to achieve the following:

The Racial Justice Institute centers racially, ethnically, and/or linguistically diverse educators’ experiences and safety, meaning learning opportunities are explicitly designed to center the healing and wholeness of brown and black educators, but not exclusively.

About IDEA: Institute for Democratic Education in America

The EAC has partnered with the Institute for Democratic Education in America (IDEA) to host and facilitate the Institute. IDEA is a non-profit organization based in Jackson, Mississippi that collaborates with students, educators, families, and communities to advocate and build capacity for education equity and racial justice. IDEA was founded in 2010 by educators, parents, and organizers who saw the need to change the narrative and practice of education towards learning that is relevant to young people and communities. A core belief was that the best way to effect widespread change is to collaborate with and raise up the voices of youth, educators, parents, and community leaders. While Jackson is IDEA’s home base, they also work with partners and communities around the United States and in Puerto Rico. Find out more on the IDEA Website.